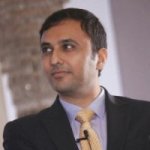 Nirav Khambhati is the Chief Executive Officer of Tata ClassEdge, an organization that aims to make a positive and meaningful difference to the education of 10 million students every year by 2025 in a sustainable manner.

Nirav was Vice President – Chairman’s Office at Tata Sons, a position he held from October 2005 to February 2014. During his tenure at Tata Sons, Mr. Khambhati led a number of international projects and collaborations in the fields of telecommunications and aerospace. He has served as Director on the Boards of a number of companies within and outside India.

He completed engineering from the L D College of Engineering and then did his Masters in Management studies NMIMS, Bombay University, Mumbai

Prior to joining Tata Sons, Nirav led the telecom practice of TCS in the Asia Pacific region and worked as the head of control or repair center at Tata Teleservices. He was appointed an officer of the Tata Administrative Service in 1997. Nirav was recognized as a Young India Leader by the British High Commission in 2013. He loves to travel and is an avid student of history.